The seeds for the idea behind The Table Group were planted sometime during the 1970s when Pat Lencioni was a young boy and listened to his dad describe the dysfunction at the company where he worked. He couldn't have known that it would one day lead to his future career. Many years later, Pat landed his first job after college at a management consulting firm that focused on issues related to marketing, finance and operations. The firm largely ignored issues of organizational effectiveness and team dynamics, which he felt were the root causes of their problems.
Over the next decade, Pat worked as a leader in different organizations where he began developing his theories related to leadership, teamwork and organizational health. In 1997, he and a handful of colleagues launched The Table Group in a loft just across the Bay from San Francisco.

From the beginning, clients were drawn to the firm's practical, fast and non-touchy feely approach.  A year after founding the firm, Pat's first book, The Five Temptations of a CEO, was published, launching The Table Group into writing and speaking.

Pat has written 10 best-selling books which have sold over 4 million copies, and he has spoken to millions of people at conferences and events around the world.  The Table Group has also developed a range of products in the areas of organizational health, teamwork and employee engagement that are used by organizations of all types and sizes.  In addition, there are more than 30 Table Group principal consultants around the world working with leaders and their teams.

The hope of The Table Group today is that organizational health will become a practical standard for any company that wants to achieve a competitive advantage and maximize its success. 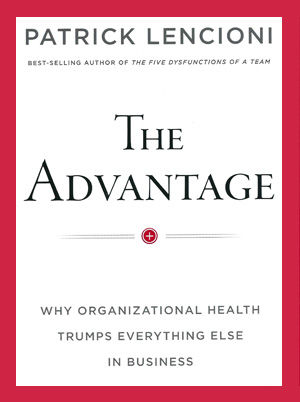